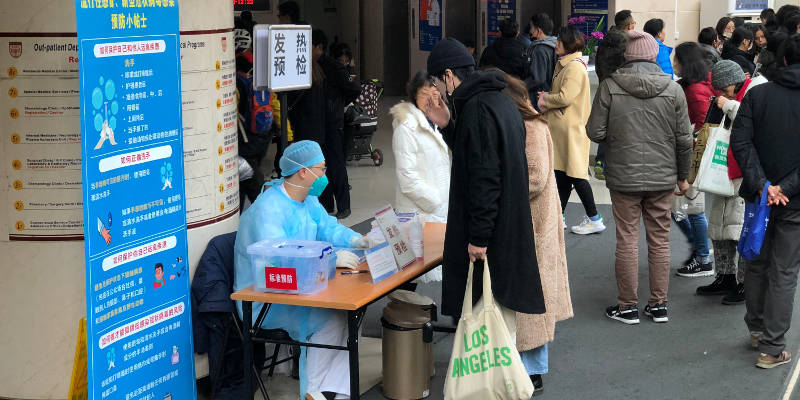 The new Omicron variant of coronavirus appeared to trigger a spike in cases globally, although the number of official daily cases has fallen sharply in recent weeks.

Studies suggest that Omicron - which quickly became dominant in numerous countries - is milder than the Delta variant, but far more contagious.

The Director General of the World Health Organization (WHO) Tedros Adhanom Ghebreyesus said there was now a "very worrying increase in deaths, in most regions of the world" and it was "premature for any country either to surrender, or to declare victory".

Asia, which was the centre of the initial outbreak that spread from Wuhan in China in early 2020, shows a mixed picture with case numbers rising rapidly in some countries while falling sharply in others.

South Korea, Vietnam, Japan and Singapore are all experiencing their highest wave of infections since the start of the pandemic.

In contrast, India has seen its daily cases fall sharply, registering 6,000 cases per day on average. The country has now recorded nearly 43 million cases in total - second only to the US. The official death toll in India is more than 515,000.

China has maintained a zero-Covid policy since the first outbreak in 2019, with harsh restrictions and widespread testing. However, it is facing a new surge in cases in the north-east of the country as well as a fresh outbreak in Hong Kong.

China has reported almost 740,000 cases and more than 8,500 coronavirus deaths - still much lower than the figures reported by other major nations.

The US has recorded around 79 million cases and over 960,000 deaths - the highest figures in the world. Daily cases and death counts have started to fall, but deaths remain above 1,000 a day.

Dr Anthony Fauci, the country's chief adviser on infectious disease, has said the latest wave now seems to be going in the right direction but hospitalisations could still put pressure on health services in areas of the country where people had not been fully vaccinated or had a booster.

Canada recently recorded its highest number of daily deaths since the country's first wave of coronavirus cases in May 2020, peaking around 165 per day at the end of January. However, the death rate in Canada remains far lower than that of the US.

Daily cases are now lower in nearly all European countries than their previous peaks, though some are further through the Omicron wave than others.

Germany, Italy, the Netherlands and Austria have recently seen their daily infections increase.

France has seen figures fall rapidly for the last three weeks, after reaching a seven-day average of over 350,000 cases a day at the end of January.

In the UK, the latest figures from the Office for National Statistics (ONS) show a slight rise in infections, while official data also shows a gradual increase in Covid hospital admissions. However, hospitalisations and deaths appear to have been greatly reduced due to the UK's widespread vaccination rollout.

Africa has seen more than 11 million cases and 250,000 deaths - but the true extent of the pandemic across the continent is not known as testing rates are low.

According to the official figures, South Africa has been the worst-hit country with more than 3.6 million confirmed cases and nearly 100,000 deaths.

South Africa was the first country to identify the new Omicron variant and it led to a sharp increase in infections - the fourth wave of infections in the country.

Several countries in the Middle East have seen severe outbreaks of the virus since the pandemic began.

The official death toll in Iran, the region's worst-hit country, is more than 138,000 and it has seen over seven million confirmed cases.

The recent wave in Israel is falling. Its vaccination rollout has been highly successful at minimising the number of hospitalisations and deaths in the country. It has now begun administering a fourth vaccine dose to people aged over 60 and to healthcare workers.

In Latin America, cases are falling nearly everywhere after a recent rise in many countries.

Brazil has been the worst-hit country in the region, recording more than 29 million cases and 655,000 deaths - the world's second-highest official death toll.

In Peru, there have been more than 211,000 deaths and the country has the world's highest number of deaths by population size - more than 640 deaths for every 100,000 people.

Early in the pandemic, Australia and New Zealand were widely praised for their response to Covid but both have now seen their first spike in cases.

Daily case figures have now fallen in Australia and the government has announced the reopening of its borders to vaccinated tourists and other visa holders for the first time in almost two years.

So far, Australia has seen more than 3.5 million confirmed cases and over 5,500 deaths.

Daily cases are still rising rapidly in New Zealand, which has recorded 362,000 cases but only 101 deaths. Plans for a limited re-opening of the border are still going ahead.

Highlights of country-level actions and WHO support to countries include:

Authorities in 219 countries and territories have reported about 100.2 million Covid‑19 cases and 2.2 million deaths since China reported its first cases to the World Health Organization (WHO) in December 2019.

Johns Hopkins data show that 26.7 million people have recovered from COVID-19 since the start of the outbreak.

The number of confirmed cases of the coronavirus that causes the disease COVID-19 rose to 33.4 million on Tuesday, a day after the global death toll reached 1 million, as governments around the world moved to reimpose restrictions on movement in a fight to contain the spread.

Dr. Michael Ryan, head of the World Health Organization’s emergencies program, said Monday the true toll from COVID-19 likely exceeds 1 million. Experts have cautioned that there are discrepancies between how data are collected and reported in different countries.

The U.S., which accounts for just 4% of the world’s population, continues to lead in case numbers and fatalities, with 7.2 million confirmed cases and 205,091 deaths, a fifth of the global total. Experts have said the numbers would be lower if the U.S. had stuck with a consistent approach to the pandemic from the outset, and implemented the wide-scale testing, contact tracing and isolation of infected patients, quarantining, social distancing and face-mask wearing, that have proven effective in those places that have got the outbreak under control.

There are now 12 million confirmed cases of COVID-19 worldwide and at least 550k people have died, according to the Johns Hopkins data. At least 6.5 million people have recovered.

The U.S. death toll has climbed to 131,521, the highest in the world. Within the U.S., infections have climbed in 38 states and regions over the past 14 days, with U.S. Virgin Islands, Montana and Idaho leading the pack. Becton Dickinson & Co. will receive $42 million from the U.S. government to build out manufacturing capacity for vaccine injection devices, to be used during the pandemic.

Brazil is second to the U.S. with 1.67 million cases and 66,741 deaths. President Jair Bolsanaro tested positive for COVID-19 on Tuesday.

The U.K. has 44,476 fatalities, the highest in Europe and third highest in the world.

China, where the illness was first reported late last year, has 84,917 cases and 4,641 fatalities.

The global COVID-19 case tally increased to 9,008,870 million on Monday afternoon, while the death toll rose to 470k. About 4.48 million people have recovered. The U.S.'s case and death tolls continue to lead the world by a large margin, with COVID-19 cases growing to 2.29 million and the number of deaths rising to 120,121. About 622,000 people have recovered. Outside the U.S., Brazil remained the new hot spot, with cases climbing to 1.08 million cases and deaths rising to 50,591.

Student should start preparing to get back to schools as the pandemic slows down, businesses are re-opening, and governments have plans of going back to normal life.

Total cases topped 6.75 million worldwide on Friday, and the number of deaths grew to over 395,500, while about 2.9 million people have recovered. But in a shocking announcement from the U.S. Labor Department, the U.S. economy added 2.5 million jobs last month and the unemployment rate fell to 13.3% from 14.7%, while economists had been expecting 7.25 million jobs lost with unemployment rising to 19.0%.

Outside the U.S., Brazil remained the new hot spot, with cases surging to nearly 615,000 cases and deaths climbing to over 34,000.

There are now 5.16 million cases of COVID-19 worldwide and at least 335,418 people have died. At least 1.9 million people have recovered.

The big overnight move was in India, which suffered its biggest case increase in a 24-hour period since the start of the outbreak with 6,000 new cases confirmed. India now has 124,073 cases. At least 3,707 Indians have died.

Global optimizm causing countries to look at China's "back to normal" process caveats and experiences, and start preparing recovery plans. Oxford scientists say a vaccine may be widely available by September. Stocks also rise seeing positive news on development of the COVID-19 vaccine and contamination figures going down.

The U.K. number surged after officials added patients who died in care homes or the community to the tally of those who died in hospitals That led to a sharp increase of 3,811 in a single day, according to Public Health England, and bumped the death toll to third highest in the world, after the U.S. and Italy. Wales has suffered 886 deaths from the virus, while Scotland has lost 2,272 lives, according to the National Records of Scotland.

New York remains the epicenter with about 300,000 cases and almost 25,000 deaths. New York state counted another 330 deaths on Tuesday, down from the 335 reported on Monday, according to Gov. Andrew Cuomo. Hospitalizations are down on a three-day basis, along with intubations, he said, but the number of new patients showing up with infections remains flat. Trump insisted that the U.S. was doing enough testing to protect Americans re-entering the workforce and said the rate of testing would soon reach 5 million a day, without specifying details. The U.S. has only conducted 5.7 million tests to date.

Don’t Forget These Things Before You Go To Campus

International PhD Studentships in MEMS Based Antennas for 5G and 6G Communications, UK